Seeds and seed pods are really quite beautiful, make good subjects for art and design.  This is a collagraph plate that I made ‘last year!’ in December from dried seed pods of the Honesty plant (Lunaria annua, aka Money Plant) and one of the plant’s leaves.  I had kept the dried specimen from 2012, so it has lasted well.  I glued the dried plant material onto a piece of mat board and coated front and back of the board in two layers of polyurethane varnish –  but it still had a little warp.  This did not make any difference when the plate was printed.  (Or so it seemed to me…)  A small piece of the leaf had already broken away in the past, but apart from an interesting phenomenon that appeared when I inked the plate (the layers of varnish came away from three of the seed pods) the plate has held up well through its various inkings and cleanings.  The photo here is what it looks like, cleaned, after an afternoon’s printing with Akua water based ink.

This is a ghost print (i.e. second print from an inked plate) from one of the initial printings.

The next two images are of a print made by inking up a piece of plastic, sending the plate and the plastic through the press, and then taking a print off the plate.  The plastic creates an interesting background with plenty of unexpected results which is one of the reasons I enjoy printing.

Finally, here is a the result of selectively cleaning the inked plate, so that only the raised parts of the collagraph will print.  Still have a lot to learn!  At least I now know that placing the paper on top of the plate creates an embossed image.  The digital ink jet paper is dry and probably causes the creasing.  I really enjoy using Akua ink as it is easier to clean up and I do not like using turps!  The ‘black’ ink (actually a combination of colours, more a dark grey) creates an image that almost could be a photocopy. 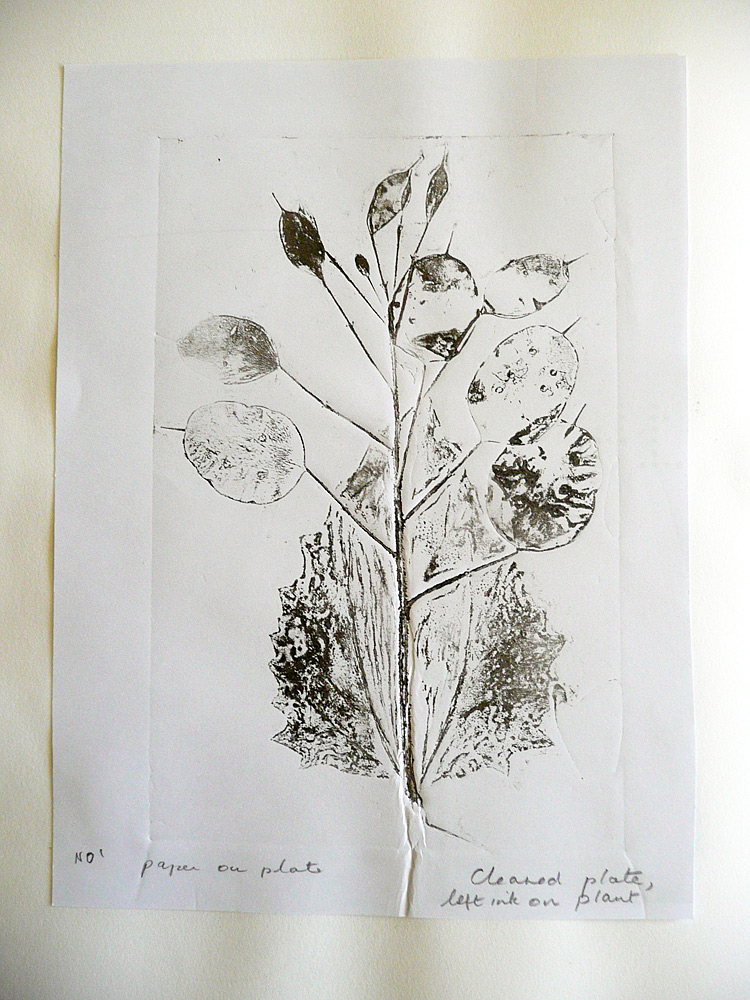 I have been collecting Rocket (Eruca sativa) seeds from the veggie bed.  Really quite fascinating, and I notice that the membrane between the two halves of the seed pod is similar to that found in dried Honesty plants.  I would like to find Lunaria rediviva a perennial ‘cousin’ of Honesty which has yet another variation on this form with more elongated pods.  [Just found out that they are all members of the Mustard family (Brassicaceae)!]